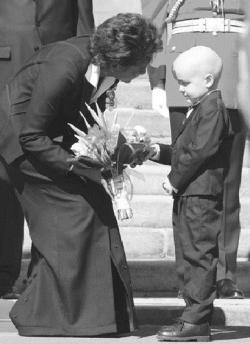 She will touch our lives in her sincere way

Larry Birkbeck expects inspiring leadership from Gov. Gen. Michaelle Jean, right, who was presented with a bouquet of flowers Tuesday by Daniel Stanton, 6, who is battling acute myeloid leukemia.

The critics of Michaelle Jean's appointment have been numerous and relentless from the beginning. They should be silenced now, but is that too much to hope for?

I hope this country will now afford our new Governor General the same tolerance that Canadians hold out as one of the defining characteristics of their country.
Not until Tuesday was I so moved by the installation of a Governor General. The entire ceremony had the stamp of Michaelle Jean over it and her speech was one of the best I have heard in decades. Her words came from the heart and each word held its own variance of emotion and focus.

All people need to be reminded that there really is hope in this world that seems to be crumbling around us. Our new Governor General offered us that vision of hope. Could we ask for more? No, but she offered more as she stressed the importance of ensuring the ethical and ecological integrity of this world for generations to come. She made it clear that this is a moral obligation.

Most defining was the Governor General's courage to address the barriers that divide us as a nation. Her comment that "the time of the 'two solitudes' that for too long described the character of this country is past" was powerful. And so was "we must eliminate the spectre of all the solitudes and promote solidarity among all the citizens who make up the Canada of today."

This is a Governor General who will exceed all expectations and who will reach out to touch our lives in her sincere way. She wears her emotions on her sleeve and seems to have a place in her heart for everyone, as well as unlimited energy.

She hopes that, together, we can call upon the vigour of our shared history to realize our dearest and most ambitious wish: to make a better world. Is there a better wish?

I congratulate Canada's new Governor General, Michaelle Jean, and wish her every success in fulfilling her role on behalf of all Canadians. Wow, what a day for Canada!